6 February 2010 - West Point, NY (NYAC Hosting)
The cadets brought the pain to the NEL this time, ratcheting up the tempo with a full-court press for most of all 3 games. The cadets handled New England for the first time this season, cruising to a 30-19 victory that was broadcast live to the world via a YouStream video uplink run by a NE player, Nader Shaar (thanks Nadar!) NYAC was successful enough in breaking the press, holding on for a one point victory over the Black Knights, 23-24. NYC handled the press the best, showing why they are the 2-time defending national champs. The cadets hung around until the very end, when NYC pulled away for a 30-24 victory. The next and final installment of the NEL will be hosted by New England and will likely be held on 10 April in the Boston Area. Stay Tuned. 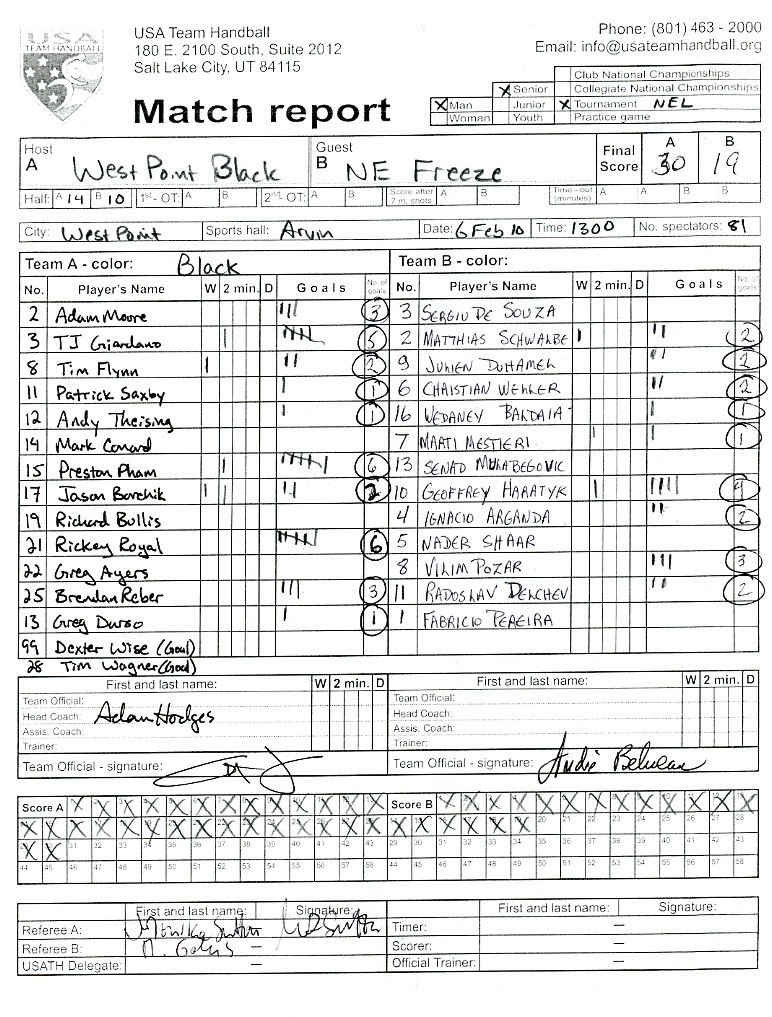 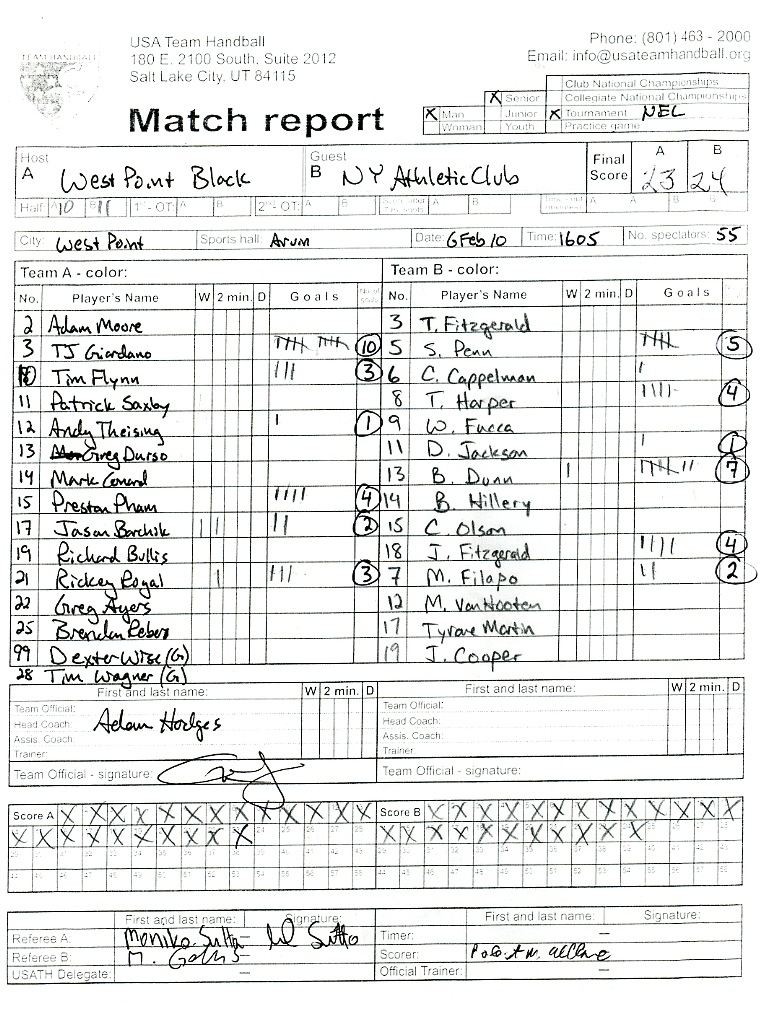 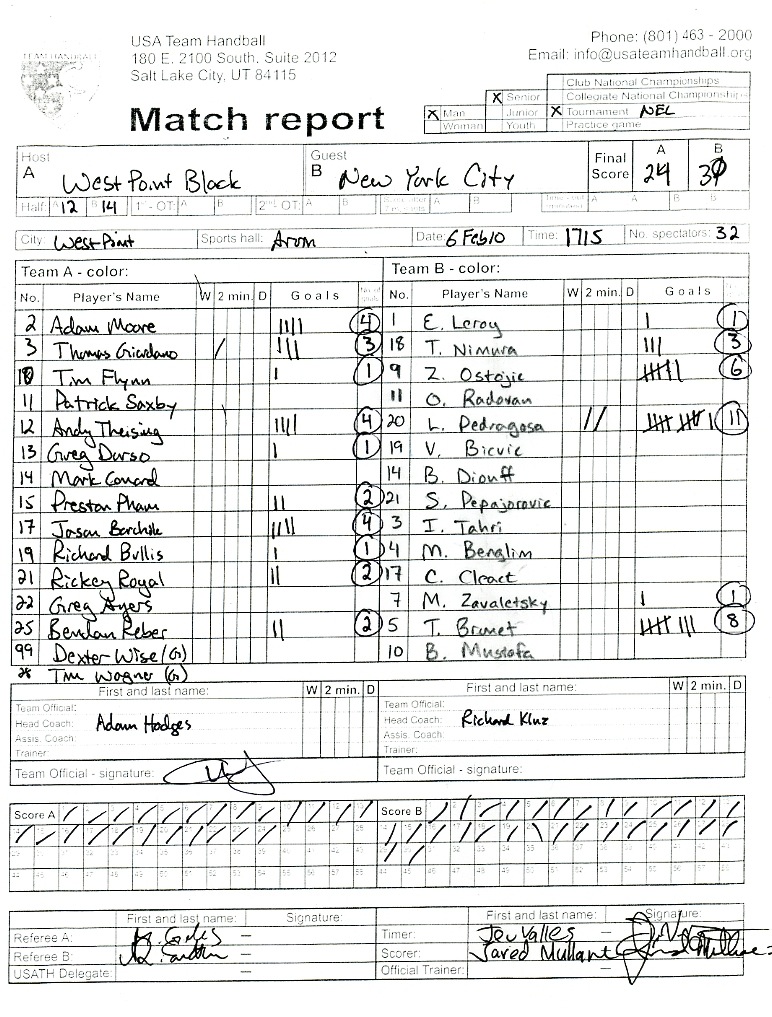 5 December 2009 - West Point, NY (West Point Hosting)
It was a different story between Army and NYC this time, as the cadets had the national champs on the ropes, leading by as many as two with less than 8 minutes in the game, but some errant passes and the champs experience got the best of us, 23-20 at the final buzzer. We did avenge a previous loss and a tie by defeating NYAC in the second game, 24-20. New England had our number for the second straight time, this time handing us a 25-18 defeat. The guys played hard and I'm very proud of them. We're in position to make a 4th consecutive College National Title run in April. We had one starter out and one only playing limited duty this weekend. We'll get another solid player back next semester when Mark Beaudoin rejoins the team after his semester abroad in France. Hopefully he's been playing handball in the land of the World and Olympic champions. 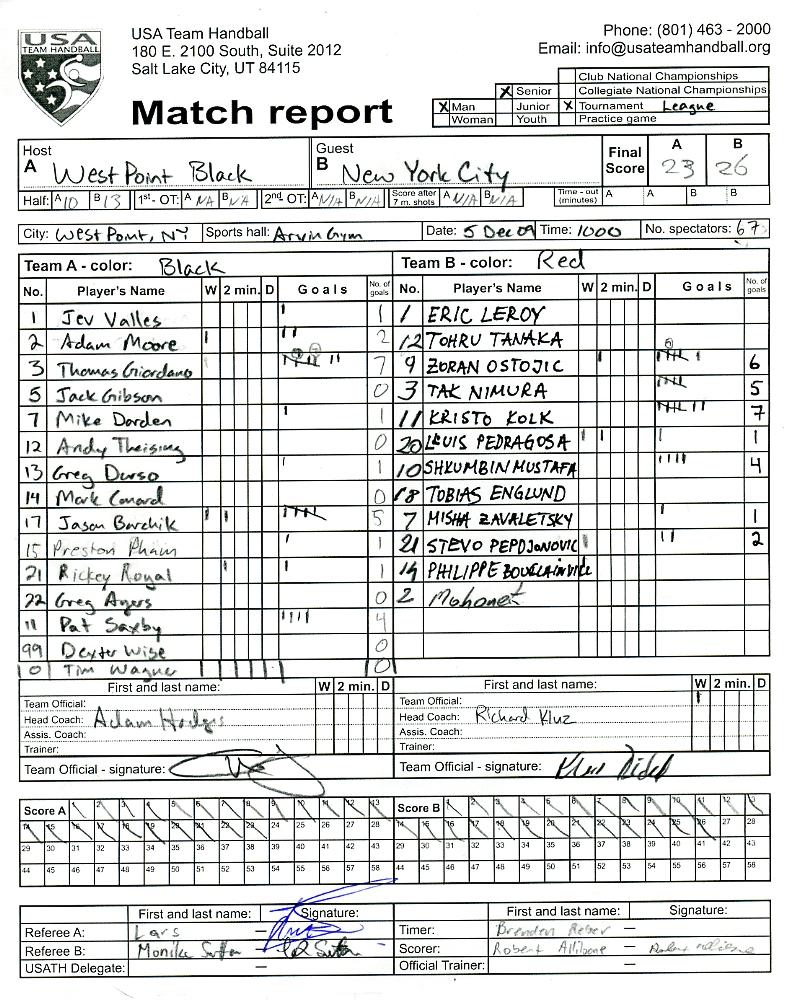 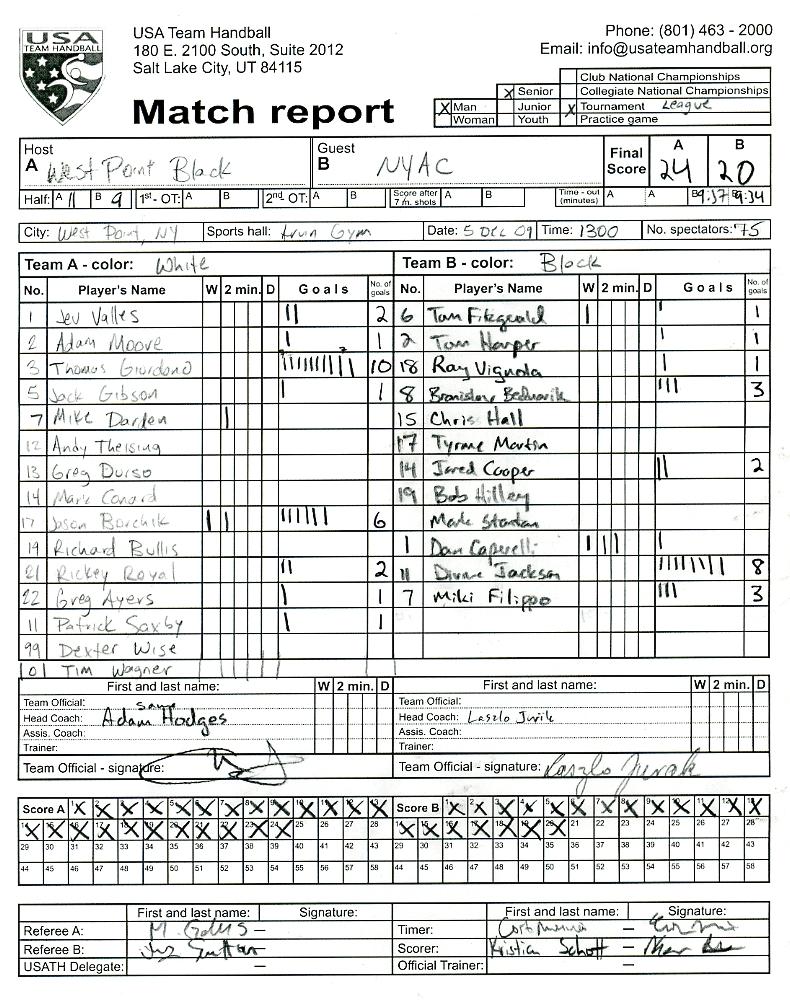 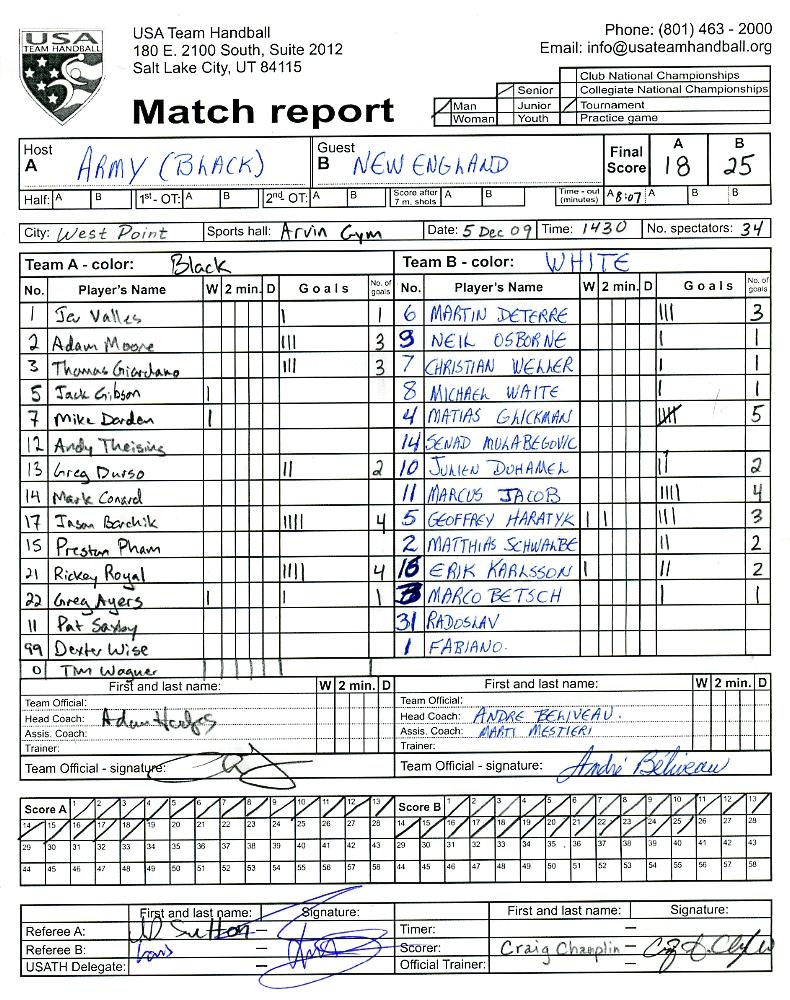 14 November 09, New York City, NY (NYC Hosting)
We spent the afternoon cheering on the Army Team over VMI in the chilly drizzle at West Point before making the drive down to Manhattan to take on the other "Series A" teams from the NEL. We let New England get out to a big lead and were not able to make it up until the last minute, when we were down by one and had to push the pace, allowing them to score some quick goals and pull away with a 35-31 win. We turned right around and played NYAC next. In a tough back and forth battle, they ecked out a 27-26 victory on us. In the night cap, NYC jumped out to a quick lead and stayed ahead in the second half cruising to a 40-26 win over us. This puts us in a hole to start the season out, but we have plenty of time to make it up, We host the league on 5 December at Arvin Gym. 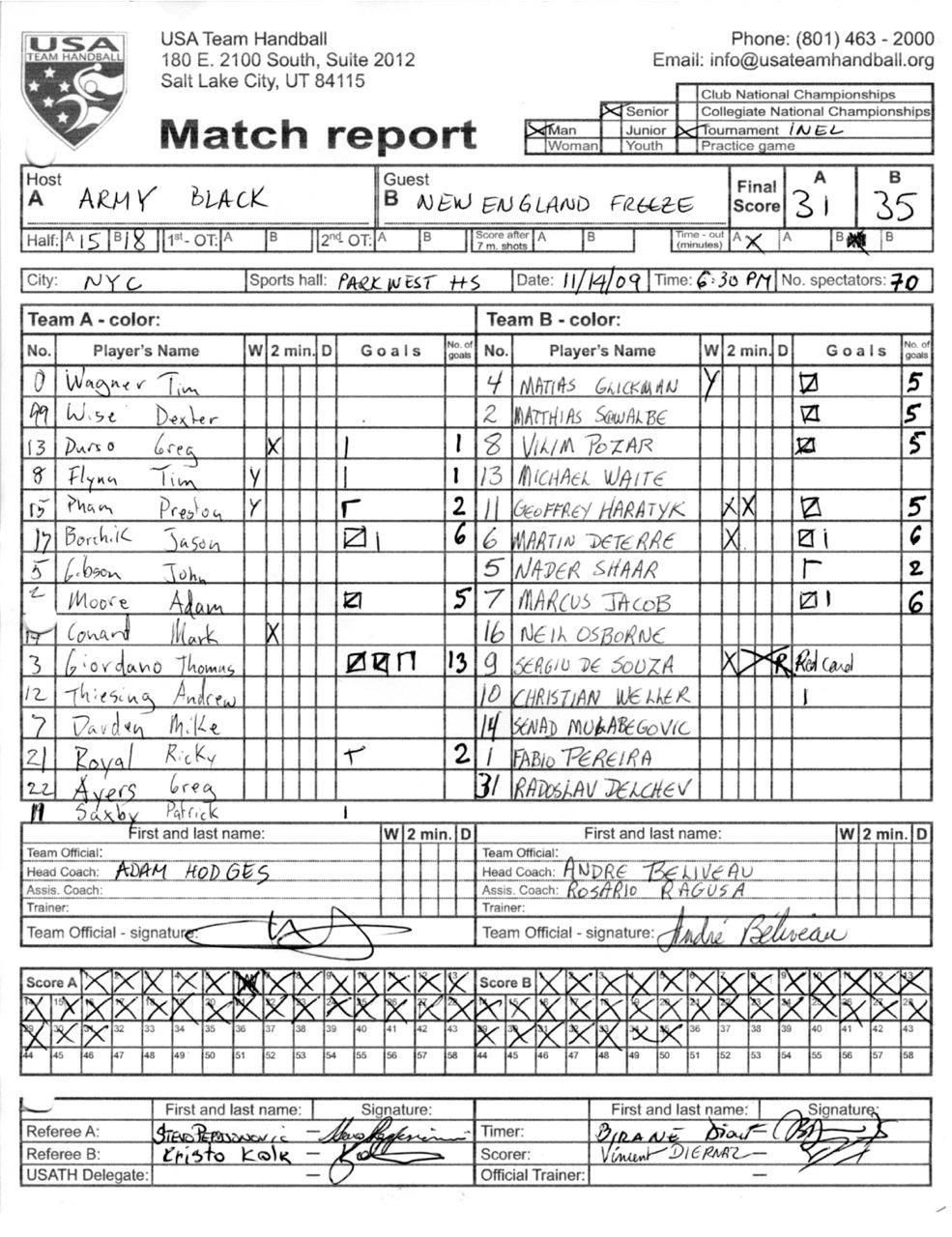 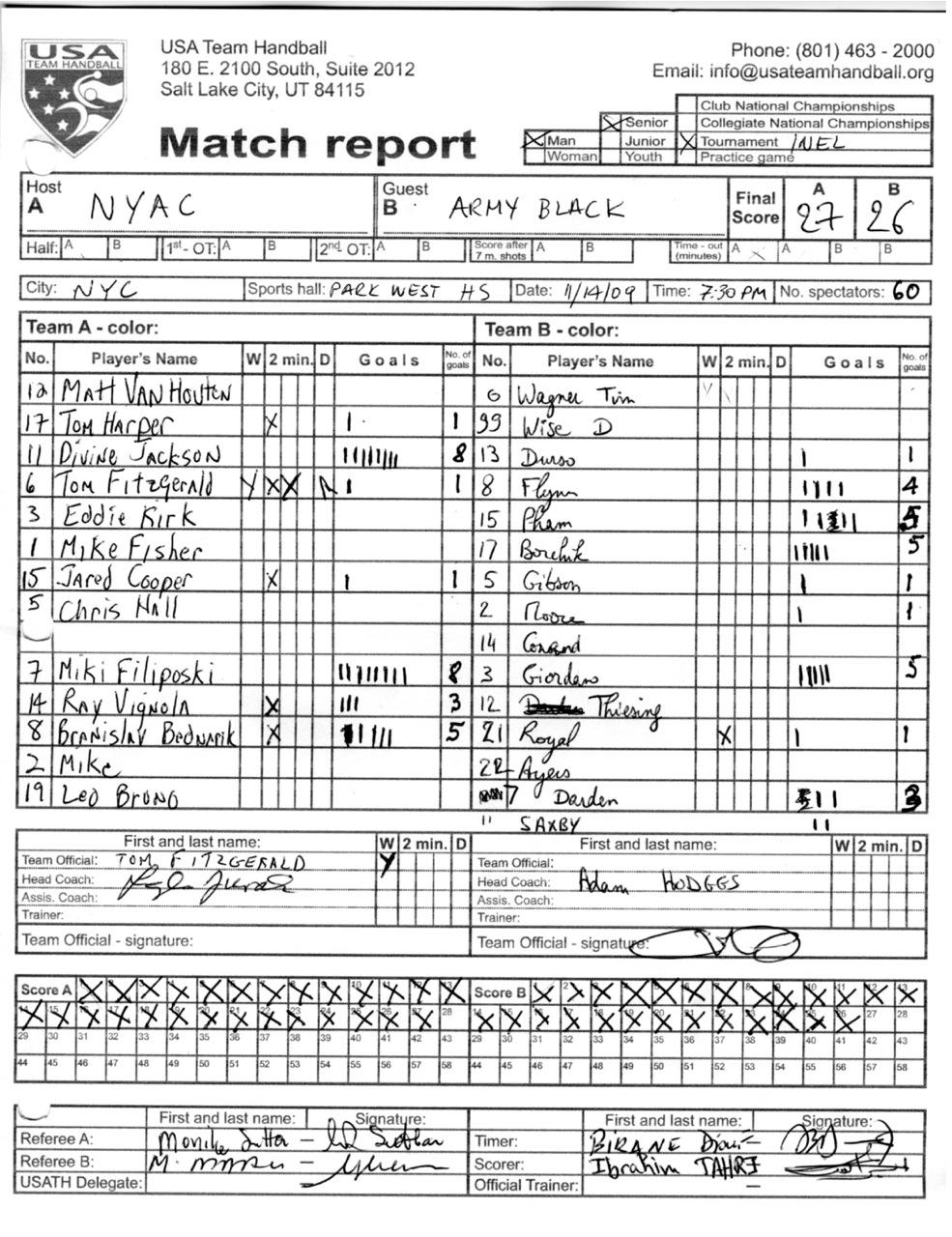 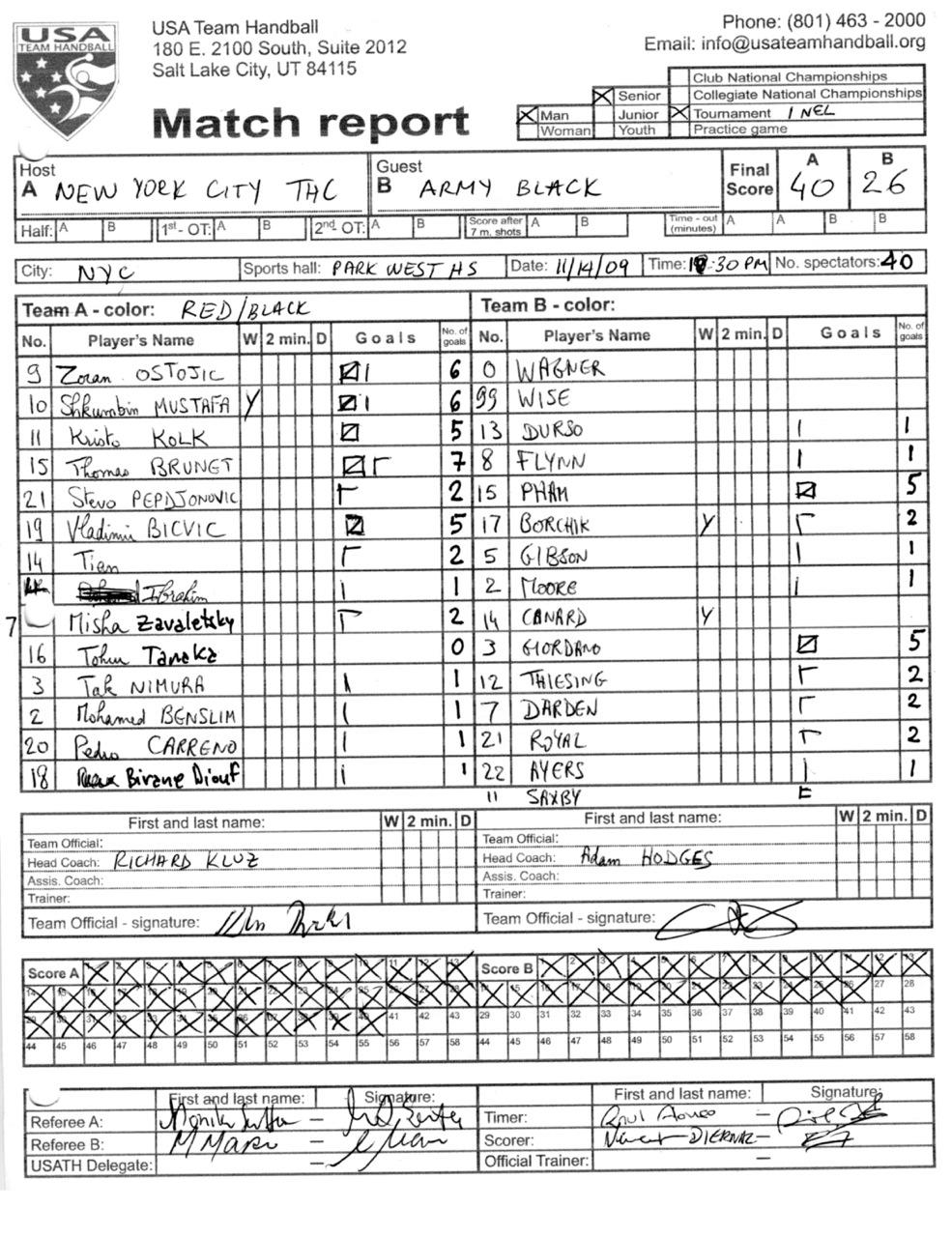